Since World Cup started, i haven’t being living a normal life. I pass clubbing to sit at some mamak to watch football. I excused myself early from a nice dinner to get home in time to watch football. I sleep according to GMT +1.00 time. I read the newspaper from the Sports Section > News.

Last time, mention football infront of me, listen also menyampah. Now, i’m enriched with footie knowledge. I even know what is an offside!! I think that’s rather an achievement for the female, aight?? o_O

Brazil finally did their samba moves tonight. Ronaldo proves to the world that even he is overweight, round and bald, he still have some tricks up his sleeves.

The bald head guy can still head in a goal after a few disappointing misses. Ok, fat guy still can run and score goals. hahaha. When he dint score, he’s just stupid fat ronaldo. When he scored, he is chubby cute Ronaldo. Wahahahahaha

Anywayyy, my loyalty still lies with Argentina~!! gO GO!! and followed by Spain. Both did very well this time around. I’m rooting for them to win the cup this year but a feng shui guy predicted either Brazil or Italy will lift the cup because its the Year of Dog -_-||| *hau siau* world cup also fengshui. Die la.

By the way, i still prefer the other-non-buck tooth-Ronaldo from Portugal. Photo taken from here 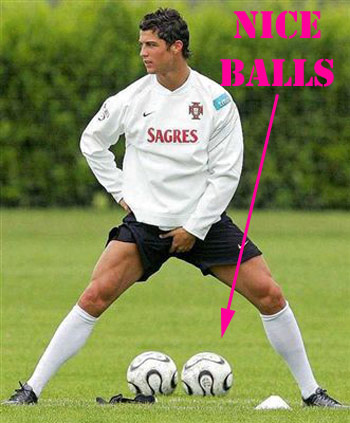 ps: will blog *normally* tomorrow with photos i took when i’m in penang last weekend. (if i have enough sleep)

3 Responses to 2 weeks of ball kicking….