A Change in My Lifestyle?

I guess the aunty-ness of me are starting to show. I’m no more blonde, not even slightest blondish. Back to asian roots, yup! (Which reminds me that i owe DivaLisa tons of money).DIE

Yesterday I went to 1u with Sarah and Hwee2. We were on a mission to find some shirts for Hwee2’s >183cm tall boyfriend -.-|| Now i realize that most shirts made for typical malaysian guy are relatively shorter which means, malaysian guys have shorter torso..???

However me and sarah was suppose to go grocerry shopping(not junk food shoppin like DivaLisa) and we did! After hunting for clothes from 2-7pm, we went to jusco and got our stuff. DAMN I TELL YOU! It’s so freaking heavy and far!

Scenario: Try carrying 4 1.5L of coke across a football field, like, twice??!!

Walau!! Regret buying those milk, so heavy… We had to walk from the basement of old wing to the highest level in the new wing carrying all that. I think my arms are dislocated after carrying all those stuff. 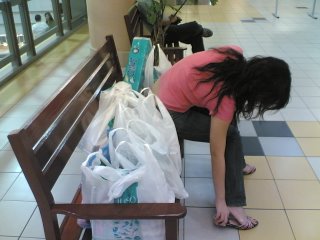 That’s me, resting infront of MPH before proceeding to the carpark. I even spoiled my shoe in the process of doing so. So now, instead of buying topshop or vincci stuff, i buy toilet rolls in 1u. How stylish rightttt??

After that, Hwee drove us to Bangsar to look at those boutique shops. Very nice, it’s the first time i actually went into those shops. Everything is sooooo soooo nice. But i can just sit on my hand while watching Hwee trying on tops after tops, jeans after jeans and also OMG those shoes! I tell you, if you have size 5 feets, you should go there.

Felt so Damn discriminated. They tell me they don’t have mould to make bigger sizes. wtf. Sad man…!! It’s not wrong to be taller than average people in malaysia ok… T_____T Everytime damn hard for me/sister to buy shoes.

Anyway, today probably is the Healthies Day in my 2years stay in KL. Woke up at 7am, attend lecture, go early lunch, come back. Then, Sarah, me and a few went to play ping pong.

Imagine. Ping Pong ok! That’s like something i was forced to play during secondary school. I spend more time chasing after that stupid yellow ball than actually hitting it. After like 5 minutes, me and another gal, went to the gym for an hour, leaving the pros at their game.Keekkeeke. Then we went back to playing pingpong for like 15 minutes of so. Improving ady okay!

How smart of us to choose to be healthy on such hazy day. Hehe… Quickly thank me! Cos me and my bunch my silly friend just suck in tons of haze for you people. >_< *cough cough* 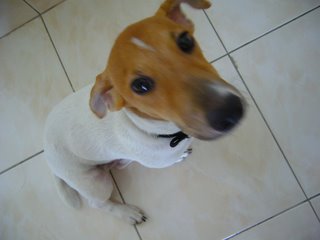 Tomorrow my landlord will be sending JacktheDog away for 2 months. That’s call for celebration dude!! The house will be fur free and no more stuff will be devour by that lil devil. My nike will be safe from it’s fangs!! 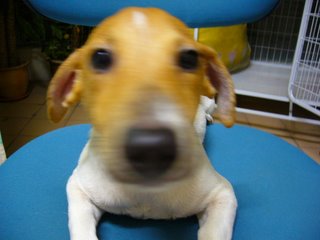 Here’s to the dog that has the WORST sleeping position ever! Jack! 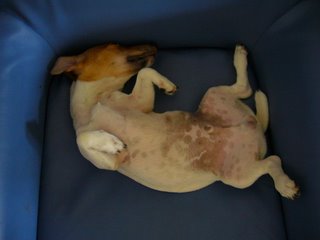 This entry was posted in Uncategorized and tagged furkids. Bookmark the permalink.

6 Responses to A Change in My Lifestyle?