Posted on October 19, 2006 by Eve
Because of you…I spend 2 hours of my life in the cinema with my hands stuck to my face!

Don’t go watch The Grudge 2. Waste money ok.. If you know me, let me tell you I did not scream in the cinema. With that sentence alone, i think you have a pretty good idea on the level of scariness or horror-ness of that movie.

I was so reluctant to watch that movie in the first place. But because Woody was so persistent about it and partly because i thought the sight of Edison Chen would at least be a bonus for me. Sad to say, it did not. AT ALL. His acting in that movie seriously sucks. And that japanese school girl also sucks. All she did is smile like she’s damn happy to be able to get a role in that movie.

Then there’s stupid scenes in that movie that doesn’t make sense at all. Like the Sally girl that kept downing the milk then vomits it all out again into the same bottle. i’m like wtf. The guy next to me (which btw, talks loudly throughout the whole movie) commented ” She thinks she’s water tap ar” hahahaha

The way those people die also damn lawak lar….. Somemore the seats we had is directly under the aircons. Cold, and scary. Lousy movie.

Anyway, they have this really nice deco in KLCC for the upcoming festivals so i thought of taking a photo an showing to my Penang Friends. HAHAHAHAHA . Happy DepaRaya to everyone!!! Can take this chance to worm at home ady. 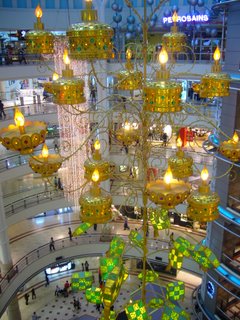 Oooo…Did anyone notice how’s the traffic was today!!!??!

Terrible!! The worse i’ve encounter EVER! Not even when i’m in indonesia ok. Left right up down also can see cars stuck in jams. Woody told me it’s his worse jam EVER too after being in Kl for like 5 years. Damn it! I can see people getting out of their car and just standing there wondering what the hell is happening to kl traffic.

Initially wanted to go PJ for dinner, but the jam force us to detour to…. somewhere we dont know where we are. So Lost!! Nearly got to Ulu Kelang, don’t know where the hell that is >_>

The jam at it’s worse when we got to Midvalley-Bank Negara area. I don’t know whats that road is called. I think we took around 45minutes just to cover that tiny bit of land. Chi sin wan ok!!! REally Chi SIN!!!!

I think something bad really happen on the road. Saw so many car got overhaul at the roadside, luckily our car nothing wrong..kekeke..

4 Responses to Damn You EDISON CHEN! and KL TRAFFIC!!