Setapak is So dangerous!!

For those people who lives under the rock for the past few days, 2 crime cases happened on the same day within the lapse of 30 minutes in Setapak. 1 died and 1 seriously wounded. Both are TAR students.

What has that got to do with me?

Well, I’m a tar student. AND i live in setapak!! SCARY!! Now want to go down and eat also scared.

jaLan-Jalan can kena slash by parang and mati katak 0_0

I dont really understand the mentally of those stupid robbers. What could a TAR student offer to you? If we so rich, wont really study at tar and our only mode of transport is by foot!! THINK! you mentally retarded being!! The most valuable stuff on us might only be our mobile phone, which when you sell it as second hand, how much could you possible get?? Is that really worth slashing up a person?

The first victim is a 18 yr old boy, freshie poor guy, who got 11a in his spm but was not granted a place in the local uni*coughcough* so he came tar. He gave chase after he was robbed and got back his mobile phone, but he got slashed seriously by 2 guy and stab in the head. MY coursemate stays just 2 door away fr the crime scene…so eerie..he was the first few to arrive on scene. Poor guy, the victim called his dad and told him not to worry.

You know what’s worse than the incident??!! The doctor from a nearby clinic refused to leave the clinic and save that boy. I mean, come on la, is that really ethically? Aren’t you suppose to save lives not tarik harga when there’s someone at the verge of dying??? 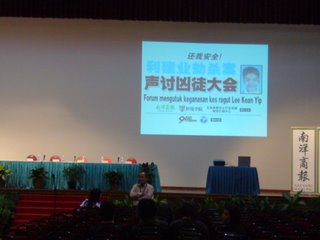 The other fella got robbed a lrt station away. He got slashed too but he managed to get help. There’s a high possibility that 2 of his fingers would be paralyse…

These are just the big cases highlighted in the newspaper. Yesterday night, in another housing area that is highly populated with TAR students, another case happen, where a guy was coerced into giving his valuables to a parang-wielding guy. This is so common around here. It’s not safe since ages ago.Why must we take action after lives have been taken?? Today we had a talk/petition signing thingie in college. We were asked to wear black or dark colours in respect to the victim. So me and roomie went over after lecture. Quite alot of people went, including ntv7 and some local yb, authorities and latuk latuk sekalian. We were given free nanyansiangpau..sorry, dono how to read but i take also..let my housemates read la. They gave us the agenda for the day, taking a glance at it, speeches followed by speeches, and i predict would be in those deep deep mandarin, i decide to blah the place earlier. haha Listen also dont understand, show me slides i also dono how to read. Waste my time there. So in nutshell, when face with danger, money or ur life more important?? Safe or unsafe enviroment, we cant really do much but live with it. Just be seng mok or street smart.

Anyway, the online petition form is available HERE. If you are banana too, just fill up at the bottom of the page, if you are chinese edu….read urself la. It’s a petition to the Prime Minister, an appeal to increase the security level around the area where tar student stays. or something. Sorry i cant read chinese too. Their initial target was 1000 names but that was achieved within the first 3 hours. Their next target is 10 000 names..and that’s achieved as well. TAR UNITES!!

9 Responses to Setapak is So dangerous!!