Since almost every blog i’ve been reading all these while is or had mentioned about this Tammy NYP girl. So I will hop on to this bandwagon as well in hope to bring at least some traffic into my blog site. *wishing, hoping,praying*

So what’s all the hoohaa in the Blogosphere about this singaporean cheerleader student affectionately named Tammy NYP by bloggers or kaypochies. Now everyone can have a 10minutes to fame ala Paris Hilton style.

Handpone with video recording features + Boy + Girl = You got yourself a homemade sex video!!

This is has been the top search in Technorati for the past few days, i think. What happen is this girl Tammy who is studying in Nanyang Polytechnic(NYP) of sillypore whose cellphone was allegedly stolen by a jealous classmate and whose sex video recorded on that phone is now spreading across the Internet.

So there’s a debate over in blogosphere whether who should be blame in this situation. Tammy is rumoured to be expel from uni soon for causing the uni “lose face” in the world. The name of the scandal is also being called Tammy, in other words the finger is pointing to her. What about the guy/bf? He is not suffering from all these discrimantion and criticism . Let’s not forget about the culprit that stole the cellphone. Shouldn’t he/she be the one that is being punished? Rather than the helpless girl? Honestly, i pity her. Women/girls has always been on the losing side since the beginning of centuries. Husband abusing wife, divorce case, work, etc.. you get what i mean.

The video first made it debut in Spymy.com( I do not have the link) and ever since then, there are many fake downloads in countless blog trying to increase their traffic (i’m also trying to attract traffic, LOLz). There are also forums being set up just to so that everyone can comment and share their Tammy stories, along with those special links to photos and video clips.

The “I Fark Tammy “ t-shirts are also selling like hot cakes over the net and needless to say, the video clip is being sold over in ebay. 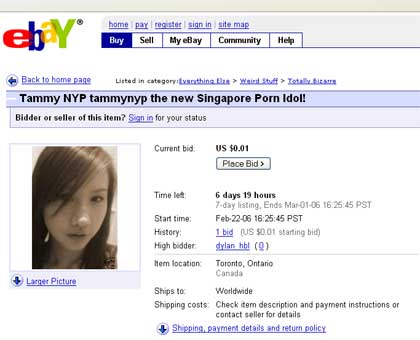 I guess the society is getting sicker and sicker by the day, always feeding on other’s misfortune, snickering and gossiping(am i one of those? i hope not). I hope it wont get any worse than this. haiZz…

2 Responses to The Tammy Bandwagon